Like traditional media, social media in China is subject to censorship. However, in limited cases, activists have employed homophones of censored keywords to avoid detection by keyword matching algorithms. In this paper, we show that it is possible to scale this idea up in ways that make it difficult to defend against. Specifically, we present a non-deterministic algorithm for generating homophones that create large numbers of false positives for sensors, making it difficult to locate banned conversations. In two experiments, we show that 1) homophone-transformed weibos posted to Sina Weibo remains on-site three times longer than their previously censored counterparts, and 2) native Chinese speakers can recover the original intent behind the homophone-transformed messages, with 99% of our posts understood by the majority of our participants. Finally, we find that coping with homophone transformations is likely to cost the Sina Weibo censorship apparatus an additional 15 hours of human labor per day, per censored keyword. To conclude, we reflect briefly on the opportunities presented by this algorithm to build interactive, client-side tools that promote free speech. 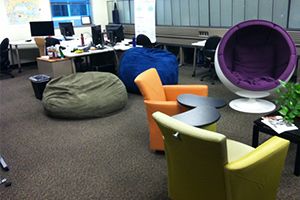 The comp.social lab focuses on the design and analysis of social media. According to their website they "like puppies, mixed methods and new students (particularly MS)."